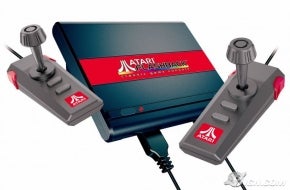 The Atari Flashback is slated to be released in November for $45, IGN reports. The story, and discussion, is on Slashdot, too. The Flashback seems hardware-compatible with the Atari 7800, a system that ran most Atari 2600/VCS cartridges, too. I’m excited because it’s a low-cost, plug-into-the-TV system that allows two people to play at once. (This experience was precluded by the all-in-a-joystick Atari VCS systems that have been released so far.) The 20 games for 2600 and 7800 that are installed in the Flashback include many standouts, and one game that was never released, Saboteur. However, it doesn’t look like it will accept cartridges, a disappointment for those who have cartridges sitting around or are planning to acquire them. And of course that would dash the hopes of those of us who want new cartridges to be made — but it turns out, those new Atari VCS games are in development, and don’t depend on the launch of the Flashback.