There’s a nice feature-length article in the NYTimes Sunday mag today, called “The Real Transformers”, chronicling Rodney Brooks’ and Cynthia Breazeal’s work on social humanoid robots, including their plans for deploying a series of toddler-like robots in a museum in 2009. (There’s a successful precedent for this, you might recall.)

(btw, I’ve been away from blogging for a while, but I plan to get back into the game soon, perhaps write those follow-up NLU posts I had mentioned.)

I have never attended a convention with the level of contempt for its attendees displayed by Comic-Con 2007. Here’s what bothered me the most. Thousands of people who had pre-registered and paid online had to wait for hours (Jen and I waited two hours, and the line got longer behind us) in the sun, outside the convention center, just to pick up their badges. No one was there to apologize — though, toward the end of the line, some convention center employees were trying to sell overpriced water to the people who (having dressed for air conditioning) were on the edge of heatstroke after their first 90 minutes in the sun.

On the other hand, the content of the conference was great — as you can tell from this picture of me at the Kingdom of Loathing booth.

This is a preview of Comic-Con of Loathing. Read the full post.
Comments (2)

The Mental Space of Game Genres 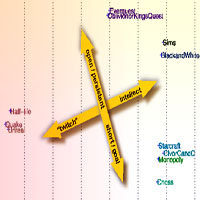 J.P. Lewis, Morgan McGuire, and Pamela Fox are asking for as many game fans as possible to take a 10-minute survey with the goal of producing data that can help improve game design. You can read about results so far or, for those who want it straight from the source, see their upcoming presentation at the 2007 ACM Sandbox Symposium (co-located with SIGGRAPH in San Diego next month).

Word on the street has it that some of the more controversial ideas are Morgan’s. Full disclosure: Morgan and I were at Brown at the same time — and the project I’ll be showing at SIGGRAPH actually depends on his G3D.

Persuasive Games is a Must Read 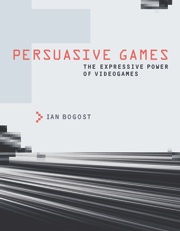 Nick and I both have the desire to write longer considerations of Ian Bogost’s new book Persuasive Games: The Expressive Power of Videogames — but, for now, let me just say that it’s an absolute must read. I taught pre-publication versions of the first chapter in both my graduate and undergraduate game studies courses last year. In both cases it set the stage for one of the best discussions of the term. If you’re hungry to think not just about how games work, but what they mean, and how they create meaning through their operations in ways that are different from non-procedural media (and you should be) this is the most important book for you to be reading right now.

When those cops got the drop on me, I knew it was the decisive moment, when it all came together, the turning point of my life. Never would a game of two-handed Simon mean more… 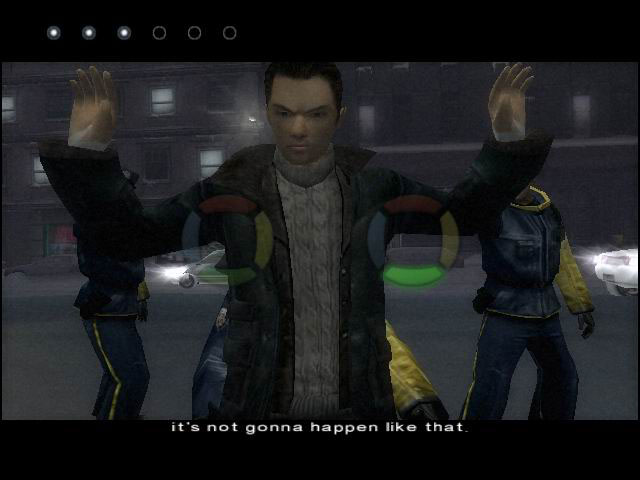 Yes, it’s time to continue the discussion of Indigo Prophecy (aka Fahrenheit) and in particular what it can teach us about the fit between gameplay and story. Last week I started out by saying how engrossing and different I found the initial scenes — first covering up for a murder my avatar (Lucas Kane) committed, then investigating it (as my two police officer avatars, Carla Valenti and Tyler Miles), with good atmosphere and a nice take on dialogue trees. Then, in the next scene, things started to go wrong: irrelevant fiddling encouraged by the environment, mundane activities encouraged by the mental health meter, navigation away from the site of action encouraged by hidden Tarot cards, and one special issue left for this post: the directional-input challenges.

This is a preview of Lessons of Indigo Prophecy, part 2. Read the full post.
Comments (16)

from Grand Text Auto
by Noah Wardrip-Fruin @ 2:10 am

I remember my avatar murdering a stranger — and there was nothing I could do to stop it. Then another couple of my avatars came in to investigate the crime scene. A large black bird watched it all happen. 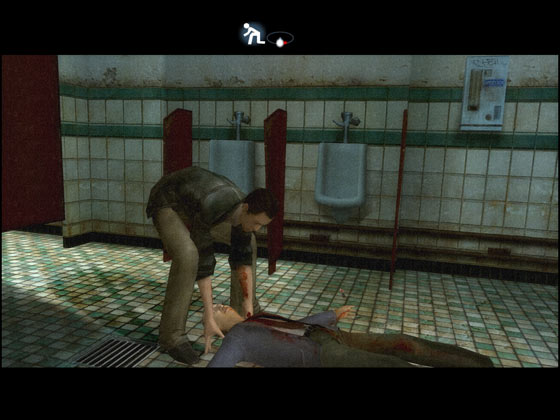 Yes, that’s right, recently I’ve been thinking about Indigo Prophecy (aka Fahrenheit, outside the U.S.). I realize it’s not exactly a new release, but games are not fruit, either. And I think there are some useful lessons to draw from this ambitious, flawed 2005 release from David Cage and Quantic Dream.

I’m interested here, primarily, in thinking about the relationship between gameplay and story. Cage’s ambitions in this area have been discussed by Andrew in his more timely GTxA post on Indigo Prophecy. Cage’s goals might be considered a less-risky version of the “interactive drama” vision that guides Façade: the gameplay can change the story in significant ways, but the system ensures the story retains an essential shape and pacing. In other words, the story becomes playable, rather than something that happens between moments of play.

That, however, is not what I want to talk about here. Rather, I want to discuss the fit between gameplay and story.

This is a preview of Lessons of Indigo Prophecy, part 1. Read the full post.
Comments (12)

The E-Poet and organizer of the recent E-Poetry Festival in Paris, Patrick Burgaud, gave an interesting talk on how he came to e-poetry and the frustrations and constraints involved in writing poetry for the electronic media. Burgaud described his initial interest in creating “language-independent” poetry, which resulted in him “inventing visual poetry, unfortunately twenty years after it had already been invented” and how this interest in visual poetry emerged into an interest in using the computer. Burgaud described some of the many constraints involved in writing e-poetry, including the challenge of creating work for multiple platforms, the problems involved in creating work for multiple screen resolutions and video-card configurations, the balance between creating work that can be quickly downloaded and work that is satisfactorily developed, etc. “In creating epoetry,” said Burgaud, “I must always hedge between what I would like to do and what it is possible to do.” Burgaud described himself as a poet, rather than as a programmer, and described a kind of poet-hacker aesthetic, which involves piecing together scripts and code written by others, and hacking them, attempting to bend them to his poetic purpose. “I am using my lack of knowledge, and using my mistakes, to find out what I’m making.” He described the process of writing an Epoem as being much like dropping a pinball through a pachinko machine — the poem changes as it hits each constraint, and the path is not predetermined, but a product of the process. Burgaud said that he had learned to accept that his work would be different depending on the machine on which it was viewed, and that he had come to accept a certain lack of control in this regard.

from Grand Text Auto
by Scott Rettberg @ 9:54 am

Katherine Hayles’s keynote talk at the Remediating Literature Conference was focused on the concept of Intermediality.

Steven Wolfram — Cellular Automata. Complexity of system comes from the interaction of many individual agents.

from Grand Text Auto
by Scott Rettberg @ 9:42 am

Marie-Laure Ryan’s opening keynote at the Remediating Literature conference was focused on “Self-Reflexivity in Net.art.”

Digital text — part of a new medium, uncertainty with regard to place in traditional media/print culture.

This is a preview of Remediating Literature Conference: Marie-Laure Ryan’s Keynote. Read the full post.
Comments (2)

from Grand Text Auto
by Scott Rettberg @ 9:38 am

I spent three days last week in the Netherlands for the Remediating Literature Conference. The University of Utrecht is one of the older universities in Europe, founded in 1630, and has an atmosphere suffused with literary and political history. Among the former faculty of the institution, for instance, is the philosopher Descartes. The conference banquet was held in the same hall that the Treaty of Utrecht, which ended the War of Spanish Succession in 1713, was signed in. This environment, a place where many historical transitions have occurred, provided a great setting in which to contemplate the changes that literature is undergoing in its relationship to other media and art forms in the twenty-first century. Topics addressed during the conference included remediations of literature into film, radio, and theatricality, the future of textual studies in an increasingly digitized world, the relationship between narratives and computer games, and most prominently, the theory and practice of electronic literature and net art. About ninety academics from all over Europe, the United States, and elsewhere participated in the conference. My attention was naturally drawn towards presentations on electronic literature, though there were many other presentations I would have wished to attend if simultaneous presence was a physical possibility. Following are some notes on Marie-Laure Ryan’s and N. Katherine Hayles’s keynotes, and several other talks. I’ll post the notes on Ryan’s and Hayles’s talk separately from my other notes. My congratulations to the organizers on an excellent conference. Not only was the conference content excellent, the food was superb as well, particularly the succulent duck breast served at the conference dinner. And not only was wine served throughout, but (a rarity in academic conferences) it was quite good wine — a lightly oaked chardonnay with hints of vanilla served with the seafood salad, and a flavorful bordeaux with the duck. Props for the attention to culinary detail.

The ELO has just announced a call for papers and works for a major electronic literature conference next May in Washington state. I have posted the announcement below. The conference website is not yet online, but will be available on eliterature.org in August.

Update 2: The schedule for the conference has been posted.

This is a preview of Visionary Landscapes: Electronic Literature Organization 2008 Conference Call for Papers and Works. Read the full post.
Comments (6)

John Cayley has now developed a QuickTime version of riverIsland will run on (aqequately prepared) Windows as well as Mac system. The piece incorporates navigable images and uses Cayley’s transliteral morphing to allow movement through two loops of poems.

Comments Off on New Cross-Platform riverIsland

Many of you know that I’m not personally working toward the goal of interactive fiction profitability, and that I don’t think IF has to make money to be a meaningful part of our culture. I’m certainly a big fan of lots of early commercial work in IF, though, and I’m also glad to see interactive fiction practice expand in new ways. So I would of course support, for instance, a long-contributing member of the IF community creating a new company that aims to expand IF readership and offer a new type of work to a new audience. And I do support it – a new interactive fiction company of this sort has in fact been established, announcements have been made about IF authors will write games for the new venture, and a full website is being readied.

The company that seeks to bring IF to market again is Textfyre, an initiative of David Cornelson, who also published Graham Nelson’s Inform Designer’s Manual in print for the first time, started the tradition of two-hour IF creation sessions called SpeedIF, and started ifwiki. What follows is a summary of the major news so far about Textfyre and some replies from Cornelson about the company and the future of interactive fiction.

This is a preview of Textfyre, an Interactive Fiction Company. Read the full post.
Comments (8)

Like a Sesame Street monster from a neighboring country, the site about the prize is (surprise) in Spanish, and it requires cookies. Deadline: October 30.

Comments Off on E-Lit Contest in Spanish

from Grand Text Auto
by Scott Rettberg @ 6:21 am

I recently made a contribution to TAGallery, a project of cont3xt.net. The project is an experiment in using del.icio.us to collaboratively tag interesting sites related to new media art and literature. Each curator/participant is contributing a short “exhibition” of ten links on a theme. Predictably, I suppose, I contributed a collection of electronic literature links.