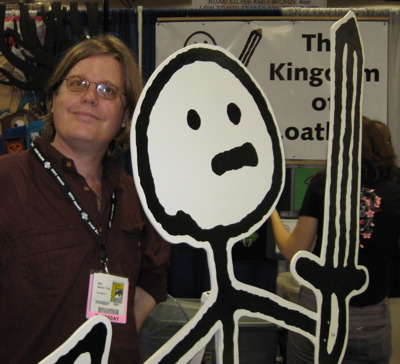 I have never attended a convention with the level of contempt for its attendees displayed by Comic-Con 2007. Here’s what bothered me the most. Thousands of people who had pre-registered and paid online had to wait for hours (Jen and I waited two hours, and the line got longer behind us) in the sun, outside the convention center, just to pick up their badges. No one was there to apologize — though, toward the end of the line, some convention center employees were trying to sell overpriced water to the people who (having dressed for air conditioning) were on the edge of heatstroke after their first 90 minutes in the sun.

On the other hand, the content of the conference was great — as you can tell from this picture of me at the Kingdom of Loathing booth. Just a few aisles away, Sony Online was demoing their latest MMO offerings. And the entire exhibit had that feeling: the plucky alternatives and the mainstream behemoths (from comics, genre novels, animation, television, movies, games, and more) all sharing the cavernous space of the convention center.

The panels were probably also quite interesting, but we missed the ones we’d hoped to see — while standing in the interminable outdoor line. However, we did catch the end of one that discussed interesting remediations of comics for mobile devices (from frame readers to AfferEffects animations to games) and saw a couple demos of the work being done by GoComics.

In the end, I found myself nostalgic for the convention I went to earlier this month: CONvergence. Pat Harrigan and I did a panel there with Second Person contributors Tim Uren and Joseph Scrimshaw. The atmosphere at CONvergence was one of real generosity, with most of the work being done by volunteers, elaborate room parties organized around sharing (favorite media, free food and drink, etc), free movie showings, and thoughtful panel discussions. There was even a room, set up by the convention organizers, devoted to serving great espresso drinks (provided by a serious espresso machine and some talented volunteer baristas) included with the minimal convention registration fee.

2 Responses to “Comic-Con of Loathing”