Flanagan honored with Vanguard Award from Games for Change

from Tiltfactor
by Mary Flanagan @ 5:27 am

Tiltfactor’s director Mary Flanagan was honored at the 13th Annual Games for Change Festival in June 2016!

Flanagan was awarded the Vanguard Award. This award recognizes the significant contributions of a practitioner by being a champion, advocate, and mentor for a new generation of game creators, and rewards outstanding individuals in impact games.

The Games for Change Festival organizers noted that Flanagan is:

“… A leading innovator, artist, educator and designer, whose works have included everything from game-inspired art, to commercial games that shift people’s thinking about biases and stereotypes. Flanagan established the internationally recognized game research laboratory Tiltfactor in 2003 to invent “humanist” games and take on social change through games.”

This is a preview of Flanagan honored with Vanguard Award from Games for Change. Read the full post.
Comments at original post.

Tiltfactor’s director gave day one’s closing keynote at Connected Life 2016: Collective Action and the Internet, a two day-long conference, held at the University of Oxford on 20th and 21st June 2016. The conference is dedicated to igniting multidisciplinary exchanges on internet research across information studies, digital humanities, psychology, engineering, business, health, and computer science. This is an excellent gathering focused on emerging research that brims with promise for the further of tech scholarship. @OxConnectedLife 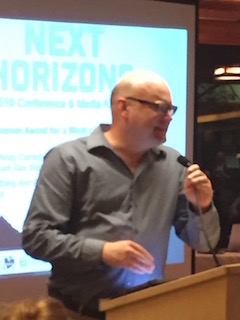 The Robert Coover Award for a Work of Electronic Literature

Current Game Preservation is Not Enough

This post is a distillation of some current thoughts on game preservation (extending to software preservation) that arose from a presentation I gave at Stanford two weeks ago. Video of that talk is here. The discussion in this post is a little more advanced and focuses mainly on the last 10-15 minutes of the talk.  I have also posted a link to another presentation I gave at the Netherlands Institute for Sound and Vision in February. This earlier one is exclusively about the issues with standard game preservation. If you are unfamiliar with this whole topic, definitely check it out.

This is a preview of Current Game Preservation is Not Enough. Read the full post.
Comments at original post.