Hello, world. Check out this map of presidential votes cast by county before you imagine that America is mostly Jesusland. (Red is all Bush, Blue is all Kerry, and purple is in between.) And if someone, such as Dick Cheney, tells you that George W. Bush got the largest number of votes of any presidential candidate in history – which is true – you can tell them that John Kerry got the second largest number of votes in history, and that more people voted against an incumbent president than ever before in our country’s history. Yes, Bush was finally elected – but not by much.

Thanks to Robert Vanderbei at Princeton for generating the map. He’s one of many academics in many departments who have worked to help us understand the election. 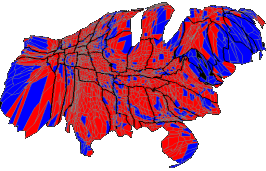 Update: As I mentioned in comments, maps make it seem as if land masses get to vote. A cartogram distorts the geography to make areas proportional to population. This one comes from this site, where a “purple” one is also available.