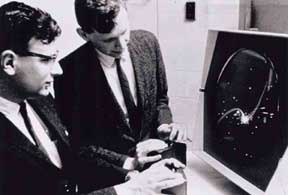 Not all playable computational media is graphical. In fact, some of the most popular early computer games were entirely textual. Games like Adventure and Zork were even at times played on teletypes, with the interaction recorded on scrolling reams of paper, rather than on terminals with screens. (Of course, an excellent tracing of the history of this textual interactive fiction can be found in Nick’s Twisty Little Passages.)

But when we think of playing with computers, we generally think of graphical experiences, those that follow in the tradition of Spacewar! rather than Adventure. Created on the PDP-1 at MIT in the first years of the 1960s, Spacewar! was the first modern video game. Two players each had a custom-made controller, which they used to control the flight of a virtual spacecraft on the PDP-1’s CRT. The spacecraft were pulled toward the star at the center of the screen by simulated gravity, and could fire projectiles at one another. A spacecraft hit by the central star or a projectile would be damaged. These are still among the central logics of graphical gaming today — the ability to move graphical objects that on some level represent the player, the ability to fire projectiles, a simulation of some form of physics, and “collision detection” when one thing runs into another. These logics aren’t only the basis for play in experiences such as Half-Life, but also (leaving aside projectiles) in pieces such as Text Rain.

We’re accustomed to seeing successful combinations of graphical logics and game rules repackaged repeatedly. Games such as Pac-Man and Tetris have had many authorized and unauthorized versions “skinned” with different surface graphics and different graphical arrangements, but with the essential logics of graphical movement and gameplay preserved. Such combinations, within a larger range of variation, are also the basis for our identifications of game genres such as “side-scrollers” and “first-person shooters.”

I bring all this up, in part, in order to make a point about the “instrumental texts” that I (pdf, html w/o images) and others have been talking about — about how they are played. While each of these pieces contains a textual component, they are all played along graphical logics. For John Cayley’s riverIsland play is primarily through the graphical/physical manipulation of the Quicktime movies; in Stuart Moulthrop’s Pax it is the collision detection as characters are caught and clicked; and in my Screen collaboration (with Andrew McClain, Shawn Greenlee, Robert Coover, Josh Carroll, and Sascha Becker) it is the movement of the interactor’s body and the collision detection of hitting words. What these projects do, in each case, is package together logics of graphical play and methods of response with textual and graphical material.

What a project like Jim Andrews’s Arteroids does differently is take a set of logics of graphical play and methods of response and then open them to many different sets of textual material. This might be seen as the same as taking the formula of Pac-Man or Tetris and opening it up to many variations in graphical representation. But, for me, it doesn’t feel the same. Somehow it feels more arbitrary, little different than if the graphics in Pong or Spacewar! were opened to replacement by arbitrary text.

I’ve been thinking about what would feel less arbitrary. As I discussed briefly when interviewed at Dichtung Digital, if the same graphical logic can be skinned with many different surface graphics successfully, perhaps those seeking to create “textual instruments” (which can be used to play many different textual compositions) will need to consider forms of play that proceed via linguistic or textual logics. Before the computer became part of everyday life, textual forms of play such as the crossword (or games of the Surrealists or Oulipo, or Madlibs, and so on) successfully accommodated many different texts by structuring play around the features specific to textuality. Perhaps the true challenge of creating textual instruments involves finding such structures that benefit from the computational environment.

If such structures can be found I also suspect that the result will feel, at least to me, in some ways like a deeper engagement with text than is possible with projects (like Screen) that proceed along graphical logics — projects that could still be played, though perhaps not as rewardingly, if their words were all converted into colorful boxes.

Of course, the next question is where one might begin to explore such textual or linguistic logics. Though perhaps this work has already begun, with those creating computer-based versions of crosswords, Surrealist games, Oulipian games, and so on. And Nick’s Fields of Dream collaboration with Rachel Stevens goes further — bringing the basic fill-in-the-blank logic of Madlibs into a project specific to the networked computer.

But there is also another related territory to explore. This is that of linguistic and textual logics previously employed in text processing and generation — in contexts ranging from the computer science subfield of natural language processing (NLP) to the artistic contexts of John Cage, William S. Burroughs, or Jackson Mac Low. Whether considered scientific or artistic, these methods have generally been operated in batch mode — either generating chunks of language or analyzing chunks of language. But there is nothing to prevent them from being run interactively, or to prevent the interaction with them from being structured as play. This is the kind of exploration that David Durand, Brion Moss, Elaine Froehlich, and I were trying to begin with our n-gram instruments Regime Change and News Reader.

And, beyond this, it’s obvious that graphical and textual logics are not the only ones that can be played. For example, while Façade includes both text and graphics, I would argue that the primary logics underlying play in Façade (that are encoded into the system’s structures for play) are neither textual nor graphical. In a recent conversation with Michael, he and I came to the conclusion that Façade might be described as interpreting both graphical actions and textual utterances as moves in play structured around discourse logics (and employing computational techniques for understanding discourse developed outside of play contexts). Similarly, one might understand Will Wright’s major contribution as making the logics of simulation enjoyably playable, beginning with the urban planning simulations of Jay Forrester which inspired SimCity.

In short, I’m starting to think that there are many untapped logics to be explored for play (and for games).