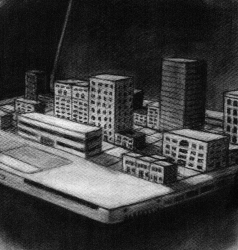 It’s been more than five years since Nick burst on the IF scene with the release of Winchester’s Nightmare (1999) and Ad Verbum (2000). His new piece, which I’ve had the privilege of playing in pre-release versions, is an addition to the field that will appeal to veterans and newcomers alike.

As a sysadmin in Book and Volume‘s nTopia, it’s easy to know what to do. Your computer, your pager, and your boss are constantly telling you. And you must spend your Sunday night running around rebooting servers whether you like it or not (there’s a big demo coming up!) or get fired. But there’s more to B&V than what the voice from your pager commands. In fact, part of what this story and game explores, over time, is the potential for performing actions beyond those made available most obviously.

This is Nick’s first full-length IF since the publication of his scholarly book on IF, Twisty Little Passages. Given this, I’m sure I won’t be alone in finding myself thinking about B&V in terms of that book’s most influential formulation: seeing the structures of interactive fiction as analogous to those of the long tradition of the literary riddle. And, in fact, this angle reveals a particularly elegant view of B&V‘s design. For while satisfying its early demands is much like puzzling through a riddle that is asked outright, delving more deeply into the work could be seen almost as a process of finding a formulation for a riddle implicit in the work’s shape but never directly posed to the reader. And, having not yet succeeded in finishing Book and Volume myself, I can say that it’s a non-trivial process that doesn’t quickly lose its intrigue.

Book and Volume is the second release from [auto mata].

13 Responses to “Opening Book and Volume”