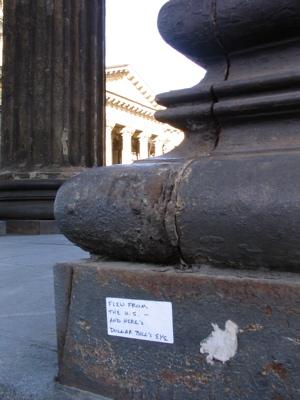 Saint Petersburg is a beautiful city, and so when the Summer Literary Seminars invited me to teach a workshop for students interested in hypertext (considered broadly) I wanted to propose projects that would get us out into the streets. Our first project — Sticker Saint Petersburg — was inspired by work like Implementation, Logozoa, and The Bubble Project. Though no one tried to use the opportunity to establish the truth of Nick’s earlier comments on Russian stickers, four of the students (Mike Alber, Ben Stark, Bill Stobb, and Guy Tiphane) have given me permission to put their work online.

Some of the work engages Saint Petersburg landmarks: 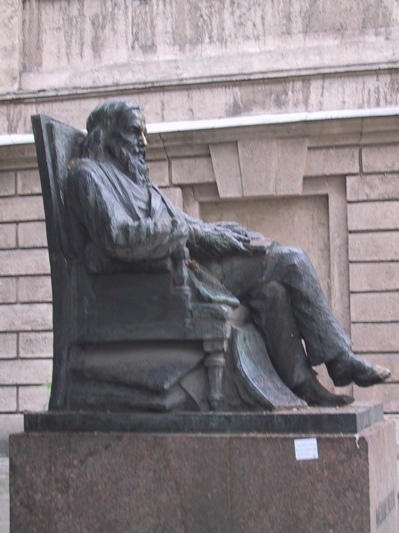 And some of the work is in out of the way, unexpected places: 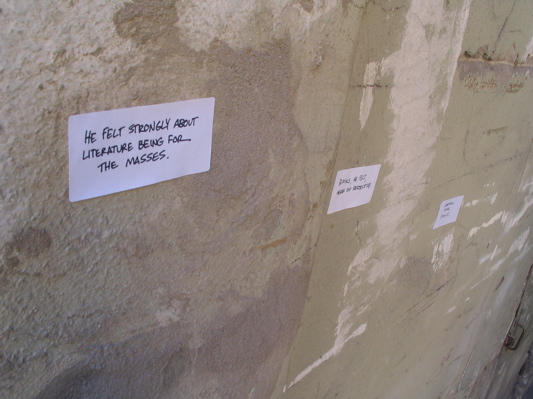 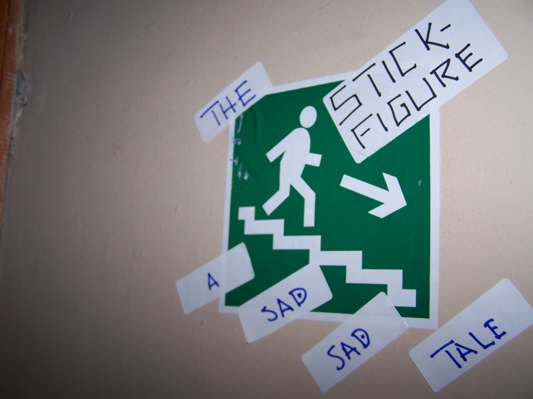 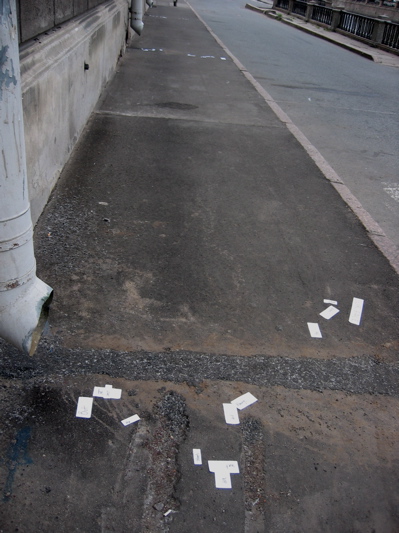 In other news, if we have any GTxA readers in St Petersburg, I’ll be giving a reading at 7pm on Tuesday (July 4th) at the Mayakovsky Library’s “American Corner” (Fontanka 46). Unfortunately, it wasn’t possible to invite extra people to Sunday’s fascinating event, “Contemporary Media: Out of Control.” This was organized by Dmitry Golynko-Volfson and Marina Koldobskaya, who brought us to the summer residence of the Saint Petersburg branch of the National Center for Contemporary Art (of which Marina is the director) on the island of Kronstadt. Dmitry kicked things off with an analysis of the current state of digital/media art in Russia, then posed some provocative questions. Next I presented a couple pieces and gave my opinion on the current state of the digital revolution in the U.S. After this Anna Kolosova showed an interesting surveillance piece — involving her making an installation in real-time by printing out screen captures from the online activities of visitors to an Internet cafe who decided to go ahead and use a computer with a prominently-posted privacy warning. She made the piece in different room of the same cafe, and had some provocative discussions with her subjects. Next Jeff Parker, one of the main SLS organizers, presented an exciting-looking forthcoming hypermedia piece titled The Drinking Game. It begins as a promotional site for a fictional game and then moves into a more ethereal, narrative mode. Finally Kirill Shamanov showed a couple of his pieces: one a series of animations designed to “program” officials with their own oaths of office (he sent customized animations to Putin and Bush) and the other specially-minted zero Ruble coins (which garnered him the attention of both the media and the ministry of finance). Translation allowed for the event to include presentations by monolingual artists (like yours truly) as well as for the dialogue to include both SLS participants and an invited group of local media artists.

Today I’m teaching again, and will be inviting the larger SLS crowd for the first hour, during which I’ll share my thoughts on “Computer Games and the Future of Fiction.” Besides stickers, last week’s class meetings focused on writing games/exercises from Dada, Surrealism, and the Oulipo. (Our workshop’s full title is “Hypertext: Writing Artworks, Networks, and Games.”) This week, as one might guess from my lecture topic, we’re moving into computer experiences (including Facade) and tabletop games (including Betrayal at House on the Hill). I’m very happy with my students thus far — who are quite diverse, including a Brown student who just finished his first year, a writing professor from Wisconsin, and a retired member of the team that founded Logitech. I’m looking forward to our second week.