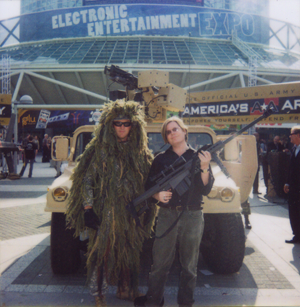 We can look at games as fantasies. When I play a game I operate in a world in which I have abilities far removed from those in my daily life — whether I’m making gravity-defying maneuvers to slice through sand monsters in Prince of Persia: Sands of Time or making executive urban planning decisions in SimCity, the game lets me act like someone I’m not.

So one question for the game industry is: “Who do gamers want to be?” Tim Schafer points to this as part of the problem that Psychonauts had in the marketplace. Did gamers want the fantasy of being 10-year-old boys?

Most games don’t take such risks, and offer variations on the fantasy of being a gun/sword/spell-toting tough guy. So the question becomes how to present that fantasy. What’s the most effective way of getting gamers to imagine the experience of playing the game will be a good fantasy of this sort? Obviously, it’s not the only question — Psychonauts had good word of mouth both about its fantasy and about its gameplay — but it’s a key question.

This year, at E3, I got to see two organizations with access to exceptional resources offer spectacular answers to this question. The first group was marketing the new special forces iteration of America’s Army — and had access to the real U.S. Army. Now, I’m a Quaker, and so I probably have less interest in the fantasy of being a special forces soldier than your average gamer. But even I couldn’t resist putting myself right where they wanted me: holding the big gun, smiling for the camera, standing in front of the jeep and next to big soldier made up like a camouflage wookie (see image, courtesy U.S. government’s Polaroid). It was made even more tempting by the phalanx of gun-toting differently-uniformed tough guys that surrounded us (see other image, courtesy TL Taylor’s digital camera). It was an amazingly spectacular way to call forth the fantasy — by removing a level of indirection. No longer did we have to think that America’s Army would let us act like soldiers, and then imagine what soldiers are like. We could just imagine being like the people right in front of us. 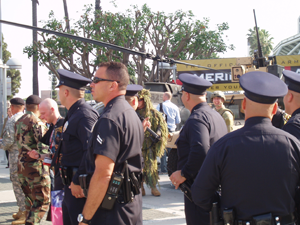 The other spectacular fantasy I saw at E3 was at a reception, starring Will Wright talking about Spore (and hosted by Wired). It was a relatively small gathering, and when we sat down for Will’s guided tour of a recent build of Spore it felt more like a regular demo than like the Army’s spectacle of guns and helicopters. But something just as over the top was in store.

As most GTxA readers probably know, the talk around Spore is about how it will harness player creativity. It’s going to be a “massively single-player” game, where the universe in which you play is inhabited by the creations of other players — from the level of primitive creatures to the level of technologically-advanced planetary civilizations. For us to believe this will work, we have to believe that Spore will be a good environment for player creativity. And so, after Will’s overview, the natural thing was to progress to bringing someone up from the audience to show how easy it is to create interesting things with Spore.

As it happened, the “volunteer” who ran up on stage was Robin Williams. He started using the creature authoring tool and ad-libbing at the same time. Squashing and stretching the spine and the body, adding and subtracting limbs and sense organs and decorations, he kept the audience laughing through a high-speed series of references to pilates, Freud, GMO chickens, anorexia, Paris Hilton, Al Jolson, and so on. He extended the spine so it could kiss its own ass, added three sets of arms, and said, “A creature that makes Darwin say, ‘Hey, I’m not taking acid ever again.'”

Suddenly, we no longer had to imagine that Spore would let us be creative, and then imagine what a creative person might do with Spore. Again, a level of indirection was removed, and we just had to imagine being like the person right in front of us.

In my opinion, both EA and the America’s Army folks pulled off brilliant pieces of marketing. And, on one level, we could dismiss both of these E3 fantasies with that observation. They’re spectacular uses of marketing resources by organizations with extraordinary access.

But I think this dismissal would also cover over an important difference in the messages at work. Playing America’s Army was presented with a fantasy of holding big weapons and jumping out of helicopters — being tough and adventurous. Playing Spore was presented with a fantasy of add-libbing masterfully while playing God — being creative and funny. Both spectacles promise more than any game can deliver, but they also help us understand what is important about the work of Will Wright and the Maxis team. The question of whether to play America’s Army or Spore might be usefully considered as the question of whether you want to imagine yourself a tough guy while carrying out increasingly practiced execution of violent missions accomplished within the Army’s rules of engagement (a militarized fantasy organized like a job) or whether you want a game that encodes its expectations for your actions at something more like the level of a responsive toy (that is, a creative fantasy organized like play).

It still shocks me how many gamers seem to want the former option. But if Spore manages a cultural impact anything like that of SimCity and The Sims it will be a great reminder of how many of us would prefer the latter.