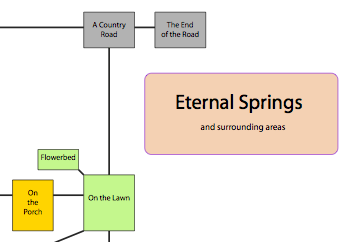 Jim Aikin, cellist and author of the old-school, maze-filled, shopping mall treasure quest Not Just an Ordinary Ballerina, has just released a new piece of interactive fiction. It’s called Last Resort (download directly) and comes packed with a PDF map. Aikin calls it “a large, serious story” and notes that reaching a winning ending is not easy, and will take many tries for most people. Below is the first bit of Last Resort’s prologue…

Tuesday afternoon. Hot, with that sticky humid Southern heat that makes your hair droop and your shirt stick to you. Why on Earth did Aunt Caroline insist on bringing you to this horrible place? “Eternal Springs,” it said on the sign at the end of the driveway. Whatever.

And now Aunt Caroline is hiding in the bathroom, which is truly weird. She’s been in there for, like, half an hour. Maybe you should go outside and explore. Not that there’s likely to be anything worth seeing in this dump, but anything would be better than hanging around a creepy, smelly motel room all afternoon.

One Response to “New IF: Last Resort”