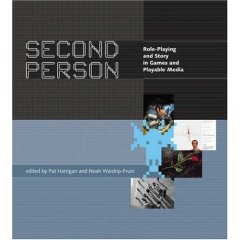 After the enthusiastic response to First Person, many people suggested that we create a sequel — and we acted on that idea. Today Pat Harrigan and I are happy to announce the publication of a new edited volume: Second Person: Role-Playing and Story in Games and Playable Media (table of contents, Booksense link, ISBN.nu link).

Like First Person, Second Person takes an unusually broad look at our field — and, in order to do so, discusses topics rarely given their due in previous scholarly publications. These range from tabletop role-playing games to improvisational theater, from political games to procedural authorship. The approach is to begin with specifics, and from there build up the insights of game designers, artists, writers, computer scientists, and scholars.

I’m sure I’ll be writing more about Second Person in the future. But now, for those interested, I’ll include the book’s introduction below.

How should we explain to someone what a game is?

I imagine that we should describe games to him, and we might add: “This and similar things are called ‘games.’” And do we know any more about it ourselves? Is it only other people whom we cannot tell exactly what a game is?

But this is not ignorance. We do not know the boundaries because none have been drawn.

In fact, perhaps too many boundaries have been drawn. There are quite a few attempts to erect borders around the concept of game — especially now that games are increasingly recognized as a major cultural force, and as game studies emerges as an academic discipline.

Of course, there are a variety of potential topics that one could pursue in relation to these forms. Second Person focuses on two interrelated strands: role-playing and story. These concepts run throughout this book, sometimes in parallel, sometimes in tension with each other. There is not always a happy marriage between something played and something told. If you are an actor in King Lear, Shakespeare has provided you with both a coherent story and a role to play within it — but your freedom of movement within your role is limited by the text. You may hiss or shout or whisper your lines; the director may choose to set the play on a Martian colony and portray Lear as a intelligent shape-changing fungus — but in the end, unless you are Thomas Bowdler, you will say, “My poor fool is dead,” and sink into the fullness of the tragedy.

Conversely, as children you may have played “Cops and Robbers,” or “Cowboys and Indians” (the examples of choice for a generation of tabletop role-playing game Introduction writers). In this case there is nothing to constrain what you say, where you run, who you shoot — but there is also no structure to speak of, nothing to ensure that the person you shoot falls down, that the villains wind up in jail. (This is what Rebecca Borgstrom calls the “nuh unh” factor.) The end of this sort of play, if it can even be said to have an end, is not the ending of a coherent fiction. The events here are arbitrary and contingent, and therefore the opposite of what we call “story.” Beyond this there is the question of how the structures of story differ from one medium to another; telling a story in a novel is not the same as enacting it in a video game. Stories are experienced differently between the tabletop, the computer, and the stage. New forms of media not only require new approaches to story, but may even force us to re-examine our assumptions about how stories are told in more traditional forms.

By design, the subject of most of Second Person’s contributors is, centrally, “you.” This is because you are the person for whom the story is being told, and because the roles discussed in this book will, for the most part, be filled by you. Colossal Cave Adventure, the first computer text adventure, famously addresses the reader, “You are in a maze of twisty little passages, all alike.” The Cave of Time, the first Choose Your Own Adventure book, announces that, “The adventures you take are a result of your choice. You are responsible because you choose!”* Jeremy Douglass, in his essay here, points out that even the most “first person” of game experiences — the 3D virtual reality that reaches its apotheosis in room-sized CAVE displays — serves the same function as the textual second person: simulated immediacy.**

Outside these caves, tabletop role-playing games speak directly to you as well; to pick only one example, Jonathan Tweet’s Over the Edge tells us:

This game is a coded message. You will decode the message in your dreams and execute its instructions in the spaces between moments of will. Neither you nor I will ever know the contents of the message. (Over the Edge 1997, 2)

The authors, artists, and theoreticians in Second Person address the exigencies of playable media in a number of ways, and in a number of voices. Some essays are informal in tone, some academic, and some highly technical; this polyglot speaks to the varied disciplines from which our contributors are drawn.

For convenience the editors have arranged the essays into three sections.

Section I groups together essays about fictions playable on your tabletop, or in your easy chair, without aid of nonhuman calculation. Many of these, such as the tabletop role-playing games (RPGs) under discussion, have an explicit social component. Some, like Kim Newman’s Life’s Lottery and Eric Zimmerman’s Life in the Garden, can be seen as variations on traditional author-reader expectations.

Section II is concerned with computer-based playable structures. Here are Nick Montfort’s and Jeremy Douglass’s thoughts on Interactive Fiction (IF) and Michael Mateas and Andrew Stern’s in-depth discussion of their interactive drama, Façade. Broadly speaking, the works discussed here are designed to be interacted with by one person: the singular, not plural, “you.”

In section III we return to the social spaces of section I, but in a wider variety of ways. Our contributors discuss the virtual communities of massively multiplayer online role-playing games (MMORPGs, or MMOs); we see how digital media (as well as older role-playing techniques) inform political discourse; and we enter into multiple other theaters as well.

In addition, we have reprinted as appendixes three fully playable tabletop RPGs. Two of these (Puppetland, The Adventures of Baron Munchausen) are discussed in essays in this book. The other (Bestial Acts) is also written by one of our contributors, and as it explicitly tries to import Bertolt Brecht’s theatrical concepts into a tabletop RPG format, it may prove somewhat more of a challenge to play, particularly for the faint of heart. These three RPGs provide not only an invitation to play, but demonstrate the wide variation possible in what many people still insist on seeing as a hidebound form.

Our hope is that this book will appeal to a wide variety of audiences. It discusses a number of playable forms, some of which have been unfortunately ignored by the academy, and all of which are important as we seek to understand our fields’ presents and futures. For example, in the last few years there has been much academic discussion of video games and other forms of digital media, but little that acknowledges in any depth the debt many of these forms owe to tabletop role-playing games. Further, it is not too much to say that where academic discussion of tabletop RPGs exists, it is largely cursory — and, not infrequently, wrong.***

At the same time, the hobby game industry (of which tabletop RPGs are a part) has not, as a rule, examined its output in any thorough critical or analytic way — the companies that release RPGs preferring to concentrate on selling product rather than philosophizing about it. There are some exceptions, of course, particularly among the growing indie RPG movement, which we will have more to say about in our introduction to section I.

Second Person does not pretend to provide an exhaustive critical overview of tabletop RPGs, or of any of the other forms that bring together gameplay, roleplay, and story. But we hope it provides a framework for further examination of these forms, by placing these works into a continuum of artistic production and providing a sampling of approaches to them driven by game design, creative writing, and more traditional scholarly frameworks. The next step, as we understand it, is up to you.

* The Choose Your Own Adventure series was an outgrowth of Edward Packard’s Adventures of You books.

** In the editors’ opinion, the best novel to engage the VR CAVE technology is Richard Powers’s Plowing the Dark, which makes heavy use of the second person form of address.

*** As an example, an excerpt from Allucquère Rosanne Stone’s The War of Desire and Technology:

The first RPG was published as a set of rules and character descriptions in 1972 and was called, appropriately enough, Dungeons and Dragons. It was an extension, really, of SCA into a textual world. D&D, as it quickly became known, used a set of rules invented by the Austin game designer Steve Jackson called the Generic Universal Role Playing System, or GURPS. (Stone 1995, 68)

While it might be quibbling to point out that Stone has D&D’s publication date wrong (see Erik Mona’s essay for an accurate account of this history), it is harder to overlook the fact that The War of Desire and Technology gets the relationship between D&D and GURPS exactly backwards. It was D&D that inspired GURPS (as it did every tabletop RPG), which appeared more than a decade afterward.

16 Responses to “Second Person for Sale”