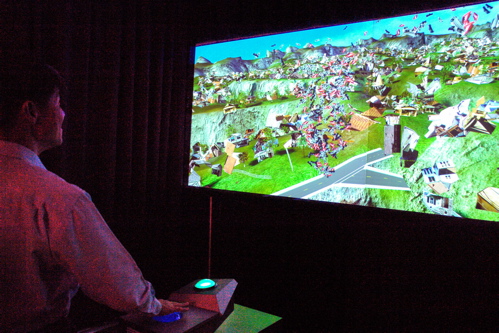 One of the pleasures of SIGGRAPH 2007 was the art gallery, clearly back in full glory — with installations, wall pieces, monitor-based works, papers, panels, and even performances. Personally, I was particularly excited that the gallery provided the opportunity to finally play, myself, two experimental games I’d previously only read about and seen demonstrated: Scalable City and The Night Journey. In their gameplay and installation forms I found them two very different approaches to the experimental art game, an impression deepened by my conversations with the lead designer of each project. 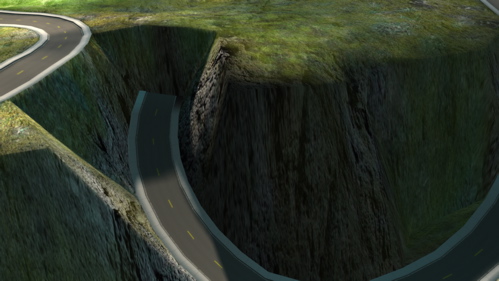 Scalable City, created by Sheldon Brown and UCSD’s Experimental Game Lab, presented itself very much as an installation: a darkened space with a double-wide projection and glowing custom controller. The main interaction was through a smooth oversize trackball, enabling an engaging style of play that felt like an inversion of Katamari Damacy. You play a whirlwind of cars, rolling over and along hills, ripping through stylized suburbs with aggressive eminent domain, laying road straight through groups of canyon-clinging houses, their pieces flying into the air — and later settling into striking new configurations. I particularly liked a couple of wildly cantilevered structures that spread over the road, still identifiably constructed from the pseudo-Mediterranian elements that make up most of San Diego’s newly-constructed housing blight.

A large glowing button, on the other hand, provided a way to take a virtual “step back” while playing. At different points in the simulated landscape it would reveal a wider view of the current scene, an insight into the pipeline used to create Scalable City landscapes, or other views of the project. I played with the trackball for a while, gleefully cutting my path across the landscape, then explored to find a few of these different views, and felt satisfied when I passed the controller on to the next player. I asked Sheldon about next steps for Scalable City and he talked about how they’d been able to use a new Cell-driven system from IBM to dramatically shorten the processing time required to create a Scalable City landscape. As a result, future installations could allow for landscapes based on the installation site — or even on locations selected via interaction with each audience member. 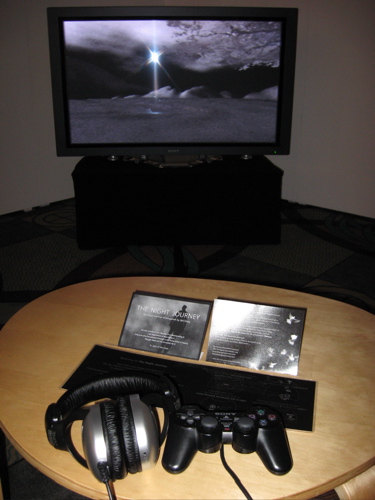 As opposed to the darkened installation space of Scalable City, something like a living room setting greeted SIGGRAPH’s players of The Night Journey. I sat down in front of a small table holding a standard PlayStation 2 controller, off-the-shelf headphones, and simple signage with a few credits and directions. A television was directly in front of me, showing the image of the game. As I began to play it was clear that, rather than the high-speed paving of Scalable City, this game’s play attempted to create a sense of quiet contemplation. (This makes sense for a game created through a collaboration between Bill Viola, Tracy Fullerton, and USC’s Game Innovation Lab.) After my slow descent into The Night Journey‘s world, on-screen directions helped me move around deliberately, pause to contemplate (and be rewarded with media clips), and just enjoy my presence in its visually beautiful space. 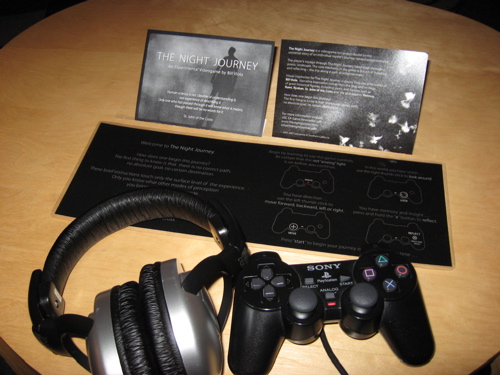 But, at the same time, the experience of other people waiting, watching, and wondering when I might be done — which was fine for Scalable City — basically defeated my attempt to suspend my normal goal-directed way of playing, which I think would have made the experience of The Night Journey much deeper. Instead I felt driven to experience what I could, quickly, and get out. As soon as I’d had my initial directions in the starting area I headed straight for the water — the obvious landmark as I’d descended — to see what would happen. I walked underwater for a few minutes, eventually got back out of the water, started wandering around, and then felt I could no longer ignore the other people waiting to play. Interestingly, I stuck around to watch the next person play, and he also headed for the water almost immediately. Maybe it’s a natural compulsion — though I think, playing at home, I would have saved the experience of immersion for later. And that, of course, is the great thing about the fact that The Night Journey uses a standard console, standard controller, and standard television (rather than some specially-crafted installation setup). It could be something to explore, at home, in a truly contemplative fashion. That’s certainly the way I’d like to experience it.

I talked with Tracy later at SIGGRAPH, and asked her about this. She said it was one of their important goals for the project to make a new claim on the standard computer game console and controller — to present them in new contexts, as the instruments of a new type of experience. I applaud this move. On the other hand, as Warren Sack pointed out when he joined us, it also means that the piece has to struggle against all the baggage and expectations already associated with standard computer gaming equipment. Personally, I think the tradeoff is worth it if we are going to get a chance to experience The Night Journey in the contexts we choose for personal contemplation. On the other hand, if it is going to be like most other work of Viola’s — only available in art venues — then I would tend to agree with Warren, and would argue for a presentation approach more akin to that of Scalable City. Perhaps with an installation design that doesn’t allow others to intrude on the private contemplation of playing The Night Journey. 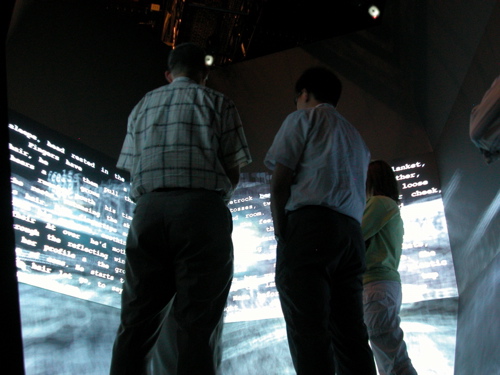 Of course, an experimental game I helped create, Screen, was also available for play at SIGGRAPH. In this case, I had little part in creating the presentation environment — the first public showing of UCSD’s new StarCave, in a 12-screen version, with 15 speakers and a floor-vibrating subwoofer. It was great to have a chance to show work in this spectacular environment, which combined audience-surrounding immersion with bright, sharp images and great sound. On the other hand, a number of audience members seemed to assume that the StarCave had been designed and built specifically to present my piece. Rather, I was more in the situation of The Night Journey, working to create a new experience for a given display and interaction technology. But in this case, rather than seeking to redefine a very familiar set of technology, Screen sought to provide an experience of play that could work together with the feeling of remarkable presence of the virtual produced by the StarCave’s new technology. (The image here was taken by John Graham.)

I’ve been moved to think about all this, in part, by my recent conversation with Mary around her post on high modernism, radical gameplay, and activist games. The familiar has the power of literacy and ubiquity — but may not be of the right shape and threatens to overwhelm with its accumulated cultural baggage. The unfamiliar requires a steeper learning curve (so may support less complexity in short periods of interaction), brings novelty (that must be addressed), but seems at times to hold almost utopian potential. With each work we explore different combinations, seeking experiences that can matter.

6 Responses to “Playing Scalable City and The Night Journey”