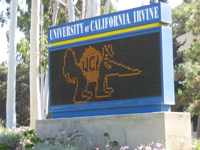 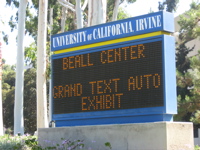 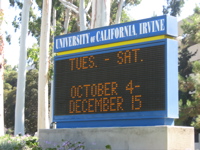 I’ve enjoyed reading a couple rather different responses to the Grand Text Auto show at the Beall Center for Art and Technology. One appeared in New University, the campus paper at UC Irvine. The general take of “Big Joy Stick, Big Fun at the Beall Center” is probably clear from this sentence:

Anyone expecting guns and violence because of this title might be disappointed, but any student who is interested in the future of video games, digital literature or technology or their impact on culture will be pleasantly surprised.

Mark Marino, at GTxA’s neighboring collaborative blog Writer Response Theory, has a rather different take in “The Exhibitionists of GTxA.” Here’s a sample:

What stole the show for me was the three-dimensional rendering of Facade, created in collaboration with the GVU Center at Georgia Tech. After having beta-tested and played Facade for far too long, to be able to see and explore this physical rendering of Trip and Grace’s apartment constructed was a bit like Going to Disneyland, and entering it was like going to Disneyland and encountering Mickey and Minnie’s “World of Baggage” in Toon Town.

While I’m at it, I’d also like to acknowledge the coverage, linking, and reblogging of Richard Chang at the OC Register, Maggie Greene at Kotaku, Liz Losh at Virtualpolitik, Simon Carless at GameSetWatch, the staff at Squeeze OC, Joseph Serna at the Daily Pilot, Ian Bogost at Water Cooler Games, Bruce Sterling at Wired, Tracy Fullerton at USC IMD, Marisa Olson at Rhizome, Jo-Anne Green at Turbulence, Matteo Bittanti at Video Ludica, Souris Hong-Porretta at Hustler of Culture, the city guide editor of Orange Coast Magazine, the staff of ArtSlant, of course my Screen collaborator Andrew McClain on The Fluther Blog, and the others that are out there. Feel free to point out ones I’ve missed.