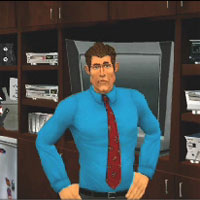 There’s a new character-driven episodic-content company on the block… SuperEgo Games, based in NYC, has announced Rat Race, “an action-comedy title set in a dysfunctional office, tasking players with just getting through the day amid a cast of difficult characters”. They’re using writing and voice talent from the TV industry in NYC, going for a sitcom-flavored game.

Our goal is to give you the feeling of ‘playing’ inside an episode of your favorite TV show. Sometimes we describe Rat Race as an interactive sitcom, but that doesn’t do it justice. There’s more to the experience than funny dialogue. Along the way you’ll sneak, sprint, solve puzzles, eavesdrop, steal, and even ‘neutralize’ that lab monkey.

Read more on SuperEgo’s philosophy page. I’ll add this to the list of new interactive story projects to keep track of! (via Gamasutra)