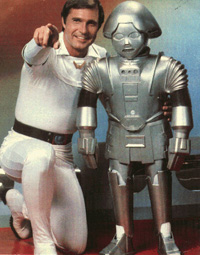 Each of us gave a “future directions” presentation at the GTxA symposium, held the day after the group show opened. Here is the text of mine, pre-written as a blog post, in the spirit of the show being borne from the blog.

Future directions… well, this show feels like some kind of funky vision of the future. Giant mutated joysticks… VR cave texts… a novel physically pasted around the world… a first real taste of the Holodeck… I’ve never seen such a cross-section of games/art/literature in one space. Many thanks to the Beall Center for hosting the show, and for Noah for organizing and curating it. It’s truly exciting, and I’m honored to be part of it. 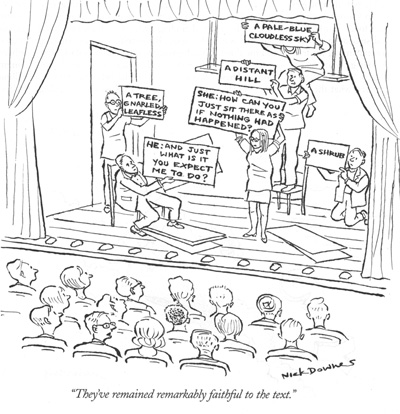 For me, future directions for digital fiction continue to be shaped by its varied but somewhat bumpy and awkward past. There are a million ways to skin this virtual cat, and many have been tried, and continue to be tried. There are many interesting approaches, of course, and in fact a diversity of forms is what we should hope and expect to see — as witnessed by the varied exhibition here today. Although, anyone who has followed our blog over the years and read our rants — well, my and Michael’s rants at least — knows we feel each approach has its share of problems.

But thinking about future directions is a stimulating and enjoyable thing to do, because besides the potential for digital fiction to be a premier artform of the 21st century, running with the baton taken from cinema and TV — who took it from the novel before that, and drama before that — in addition to that potential, digital fiction can be a very hard, very challenging, and therefore very frustrating and rewarding problem to work on. There are so many frontiers to pursue, so many directions digital fiction can be taken, we could spend our whole lives working on it, if we want.

Unlike some of my more amiable colleagues here — whose more generous spirits lead them to celebrate the multitude of praiseworthy digital fictions already out in the world — my motivation as a practitioner, and blogger discussing and critiquing the field, is largely defined by what has *not* yet been done.

The thing is, it just really, really bothers me that there is not yet an interactive story that I truly enjoy. It drives me crazy sometimes, but it also drives me to spend ridiculous amounts of time trying to build one.

Part of my lament, is that among the digital fiction and virtual worlds out there, there hasn’t been much to offer about the themes I enjoy — communication between people, domestic life, intimate relationships, and the messiness, nuance and complexity those brings along with them. My own work, past and future, is all about attempting to seriously do justice to these themes.

But as much or more than theme, I’m concerned about form. One of the first posts I wrote, in the month we launched Grand Text Auto — May 2003, over four years ago now — was titled I Can’t Get No Satisfaction, and it reads like I could have written it yesterday. I wrote about my desire to break away from what I called “the tyranny of discrete, delineated choices” offered in virtually all interactive stories — whether those are multiple-choice dialog menus in a video game, hot-linked words in a paragraph of a hypertext fiction, or a modest set of commands in an interactive fiction. I wrote how I felt straitjacketed when an interface of pre-defined choices is forced upon me by the authors — how, if a story is going to be interactive, I want to be able to freely express myself in my own way and on my own terms.

And along with that, as much or more importantly, I want to have a meaningful, rewarding impact on the fiction. For me (and this is my personal bent), if a fiction exists on a computer, with all of the potential that implies, it’s not enough to only explore a virtual world or networked narrative, without having an effect on it. And when there are effects, they need to build upon themselves, and be significant throughout the experience — not just selecting one of a few different endings, or worse, having my interactions get discarded in order to return to the story’s unwavering, linear plot. Yes, I’m talking about the a-word, agency. 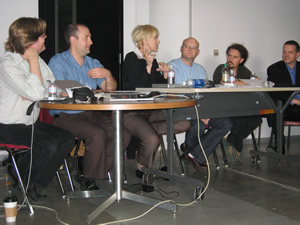 I should say, I’ve felt guilty at times about this position, because I’ve felt that my dissatisfaction could be viewed as a disapproval of the excellent efforts of my fellow bloggers, several of whom make interactive fiction and hypertext fiction. So let me take this opportunity to thank them for graciously putting up with my axe-grinding, quite patiently I think.

Actually the good news is, over the past four years of reading their blog posts, papers and books, as well as from the too-rare real-life encounters with them, I’ve learned to really appreciate hypertext fiction and interactive fiction! In fact, I see more similarities than differences in all of our work, and I feel like we’re more cohesive as a group than I first thought.

In fact, sometime in year two or three of blogging, after writing a particularly satisfying post in which I profusely linked back to a bunch of my and my co-bloggers’ older posts, each of which linked to other posts, and other sites around the web… I realized I’d been tricked into writing a massive collaborative hypertext! And that was a really great feeling.

So, in terms of future directions… A big goal for me, also unlike my fellow bloggers, is to try to make a living exclusively building digital fiction, full-time. I’ve done it before, actually — believe it or not, people paid me a salary, plus stock options, over a 5 year period, to make two of the pieces here in the show, Petz and Babyz. For that I feel very lucky, and I’d like to thank my mentor, Rob Fulop, for giving me that opportunity. (Of course, I followed that up with 5 unpaid years to work on Façade, but anyway.) It’s actually pretty fun to be the sole industry guy on the blog (though I’d welcome others); I feel like a liason between the game industry and academia. I love having a foot in each world.

Simultaneously with making a living at this, I have the compulsion and need to build that digital fiction that will finally satisfy me, as a player. To get there means more R&D — building upon what worked in my past projects, improving upon what didn’t work, and pushing towards that holy grail of a high-agency interactive story with a highly-expressive interface.

Technology-wise, that’s ultimately going to mean building systems that can truly generate language and story. Why generativity? A critical component of agency is having the story respond to what the player wants to do, to go where the player wants to go, to be a capable improvisational partner and collaborative writer with the player. This requires so much story content, that it is impossible to pre-write it all. The system is going to need the narrative intelligence to write its own dialog — an ability endowed by the rules and knowledge that will be supplied by us, the human architects and authors. This is will be a key part of the solution to the combinational explosion problem in interactive narrative.

I could spend my entire career working on this. And I might — it’s certainly the most interesting thing I’ve found to work on, something that so many people in the world want and are asking for. I might burn out on it eventually, but right now, I’m full steam ahead. (Well, I’m a part-time stay-at-home dad right now as well, which I love.)

R&D towards interactive story generation may be my long-term future direction — but in the short-term, I’ve got to make commercial products that can get the necessary funding to be produced, and are fun enough to play that they will sell in the marketplace, hopefully funding the next production and future R&D.

I’ll briefly describe one of the products I’m hard at work developing, an interactive comedy-melodrama called The Party. I’m leading the design, engineering and fundraising efforts of The Party. Michael plans to contribute to the production as his already over-committed schedule permits; eventually the full team will be around 10 people.

I’ll illustrate my description of The Party with some concept drawings.

(Apologies, I’m not going to post The Party images on the blog — it’s way too early to get the hype machine rolling. Consider that the benefits of attending the symposium live!)