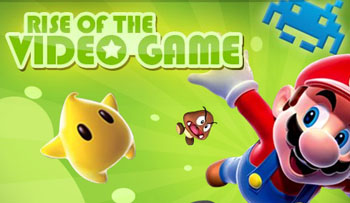 Here is another documentary to report, this one a 5-part series on the Discovery Channel called Rise of the Video Game, airing each Wednesday night over the next few weeks. Episode One, a week ago (that I unfortunately missed), included discussion of the Cold War’s influence on the creation of the first videogames.

Episode Two, which aired last night and will be repeated this Saturday at 11am ET/PT in the US, summarized how games have evolved over time, from Donkey Kong to GTA3. Various famous game designers contributed quotes, including Sid Meier, Al Lowe, Tim Schafer, Neil Young and more. More substantially though, journalists such as Heather Chaplin and J.C. Herz get boucoup airtime, doing most of the work of providing the narration about the history of videogames. From what I’ve seen the overall writing and editing are pretty good, and game bloggers seem to like it so far.

Michael and I were briefly interviewed over a year ago (in separate cities) for the documentary; I’m hoping one of us will appear in Episode 4 in two weeks from now that focuses on AI in games, featuring Will Wright and Sid Meier. However it seems 10 seconds or so of my likeness did show up in the 59th minute of Episode 2 — me mentioning something about how game characters need to be better.

Doing some blog searching, it seems this doc already aired in the UK and/or Australia, under the name I, Videogame. Have any GTxA readers seen it (and do you recall what happens in Episode 4 :-)?

3 Responses to “Discovery Channel on Videogames”