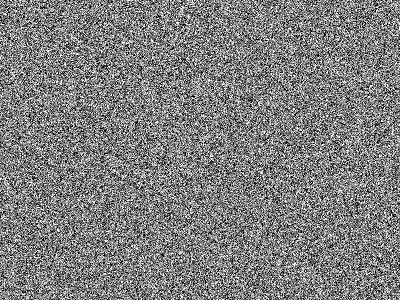 Lost in the Static is a wonderful little Windows game, one that was quickly developed around an innovative concept. The gameplay is conventional: it is a typical platformer and combines standard jumping challenges with movement through new and interesting spaces. But the means of creating an image on the screen is not at all conventional, as this screenshot should make clear.

By animating different regions of random black-and-white dots differently, Lost in the Static shapes the platforms, the “man,” and the dangers and obstacles in a way that is visible to the player. No screenshot, on the other hand – no static image – manages to capture what these elements look like. Some report that it’s uncomfortable to look at the screen, but I found it quite comfortable and compelling, even though I don’t take a liking to other whacked-out visual material such as random dot stereograms.

Barrett got the basic concept for this game from Sean Howard, who showed in an animated gif how this type of display could be done. In a few days, Barrett dropped this idea into a small but fascinating game world, showing that the concept is suitable for a game and creating something fun to play.

I played through Lost in the Static twice (not a big time commitment, admittedly) and I’m likely to fire it up and show it to others in the future. The way the game functions is nothing special, certainly; it lacks much in the way of mental challenges and doesn’t require great dexterity. It’s wonderful, though, in that it is full of wonders. It’s not often, after all, that a program comes along and offers the player what is literally a new way of seeing. For interactive retinal art, Lost in the Static is really not bad. It’s certainly worth it to run your eyes over it.

6 Responses to “Opening the Static Eye”