My Mind is Going… 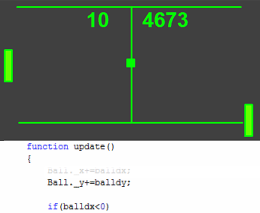 Welcome to the Naked Game. What you are seeing is a primitive version of ‘Pong’, being played by two artificial intelligences, with the entire code governing the mechanics of the game exposed below it, and the variables affecting the mechanics to the right. Furthermore, you can remove lines of code and see the effects in real time.

I kind of think of this as the Web 2.0 indie game version of HAL devolving as he sings “Daisy”.

6 Responses to “My Mind is Going…”