Joystick Programming on the 2600, or How Stella Got Her Bots Back

The Atari 2600 could have been a player-programmable system! Fathom that.

If you were old enough to hold a joystick in 1978, you have encountered the work of Rob Fulop. Early in his career Rob made a name for himself as an Atari 2600 game programmer and designer, responsible for the highly successful cartridges Demon Attack (Billboard’s Video Game of the Year in 1982), Cosmic Ark (1982), Fathom (1983), as well as the 2600 ports of Missile Command (1981) and Night Driver (1978) from the original arcade games.

If you followed the news in the early nineties, you have also encountered Rob’s work. In the late eighties Rob co-developed Night Trap for Hasbro’s never-released NEMO system; in 1992 (without Rob’s involvement) Sega acquired and published Night Trap for their Sega CD platform, that later played a key role in the 1990s Congressional hearings on offensive video game material. Night Trap, along with Mortal Kombat, begat the ESRB game industry ratings system.

I met Rob in 1992, fresh out of grad school and barely 22 years old, becoming one of the first employees of his newly founded company PF. Magic. Rob had this crazy idea for a “virtual pet” (a what?), that ended up establishing a new game genre and becoming PF’s most successful product line, still selling to this day (Petz is now owned by Ubisoft). Rob was one of my primary mentors, and what I learned from him has influenced all my work since. 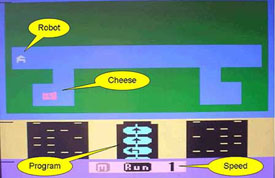 Last October on 793.5, his blog, Rob described a halfway completed, unreleased Atari 2600 cartridge he had developed in 1984, called Actionauts. To my knowledge, Actionauts would have been the first player-programmable virtual bots.

I set out to make a game featuring a programmable robot. Such occured to me at the time as a “natural”. My goal was to create a simple and fun programming game, with the principal challenge consisting of the experience of “debugging” – doing the basic “how did I blow it THIS time” shuffle… a familiar dance near and dear to the heart on anybody whose written even the simplest BASIC program. The idea was pretty basic. A robot on the screen would be controlled by a linear series of ‘commands’, its program if you will. There would be four commands to start with… consisting of the most primitive things a robot could be told to do. The player needed to get the robot to acheive a number of onscreen objectives.

Rob has recently announced he is releasing limited edition copies of the Actionauts cartridge for sale, for interested collectors.

A version of Actionauts did get released for the Commodore 64 in 1985; you can play it emulated here. (A related concept, Robot Odyssey, came out in 1984 for the Apple II and TRS-80. And don’t forget Big Trak from 1979.)

Mr. Fulop has also been recounting other bits of history from his days as a 2600 (a.k.a. Stella) developer, including his attempts to make David Crane cry, and advice on “killing one’s children”.

5 Responses to “Joystick Programming on the 2600, or How Stella Got Her Bots Back”