It wasn’t the first video game, or even the first arcade game, but that’s like sort of like saying the Model T wasn’t the first car. Pong looms large in both arcade and home video game history. The cabinet and the home unit helped pave the way for economically successful video games, the basic game form was changed and reinvented in numerous ways, and Pong became part of the zeitgeist. Recently, the movie rights to Pong have even been optioned by Uwe Boll. 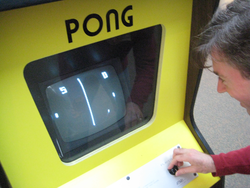 Pong‘s design and engineering, its relationship to earlier games, and its launch can be discussed in very great detail, and they have been in many books and various digital forms, from FAQ to page to site. In our book Racing the Beam: The Atari Video Computer System, Ian Bogost and I briefly describe how Pong blasted into the arcade video game space that Bushnell’s Computer Space had attempted to open up:

The ﬁrst Pong unit was installed in Andy Capp’s Tavern, a bar in Sunnyvale, California. Increasingly apocryphal stories of the game’s installation report lines out the door but almost never mention the precedent for coin-operated video games in Andy Capp’s. When Alcorn installed Pong in the summer of 1972, Computer Space was sitting there in the bar already.

Pong solved the problem that plagued Computer Space—ease of use—partly by being based on the familiar game table tennis and partly thanks to the simplicity of its gameplay instructions. “Avoid missing ball for high score” was a single sentence clear enough to encourage pick-up play, but vague enough to create the partial reinforcement of the slot machine and the midway; after failing, players wanted to try again. One other important sentence appeared on the machine: “Insert coin.”

In this post, I’ll mention a few things that I think made Pong appealing to tavern game players in the early 1970s. Then, I’ll look to how a handful of the many Pong remakes over the years have tried to refashion the game for new settings.

Pong‘s graphics were straightforward, and must have seemed so even at the time. While video games were novelties in many contexts, Pong could not have seemed surprisingly high-tech that first day in Andy Capp’s. Computer Space offered more elaborate graphics, a snazzier-looking console, and more complicated and impressive controls. Pong did deploy the basic elements of image, sound, and even text (or at least numbers, to keep score), though, without being a dazzling multimedia experience. “Pong” is an onomatopoetic word, highlighting the arcade cabinet’s sound capabilities. The knob controls may not have looked fancy, even when Pong was launched, but they are responsive and would have been immediately intuitive to anyone who had used a radio dial.

The form of the game and the way that it is played was familiar, too. Pong implemented a table-tennis or tennis-like game. As in previous tennis-like video games, the traditional game was not represented with great fidelity, but abstracted. A line appears where the net would be, but it is a simple decoration, playing no functional role in the game as an obstacle. This is in keeping with the flattened representation of tennis that Pong, an inherently 2D game, provides. Also, to keep the quarters dropping, “ball serves automatically” so that there is no opportunity to pause between points. Finally, it’s important to the original reception of Pong that it was a competitive game that fit in well alongside other social, multi-player activities such as darts and pool. In this regard, it was not unlike to the two-player version of Computer Space, a game that also was produced in a single-player cabinet.

The tennis game in the first home video game system, the Magnavox Odyssey, was not known to engineer Al Alcorn but apparently (based on the ensuing course case) was to Pong designer Nolan Bushnell. The product that Atari developed and finally released in 1975, a version of Pong that people could purchase and connect to a living room television, bounced the game back into home court from the arcade. It was sold by Sears in the sporting goods section, a sign that even Atari’s exclusive, successful retailer couldn’t figure out exactly how to categorize video games.

The original device mimicked the arcade game in many respects: an automatically serving ball, for instance, although this was not necessary in the home, and knobs that were fixed alongside one another as they were on the cabinet. The units innovated a bit over the Odyssey game, though, providing sound and a score display, as the arcade game did, and a higher-resolution display. The home game even offered a color display. Picking up on these important arcade game elements – which Atari managed by designing a special chip – made the home version of Pong the first successful, faithful video game port. Atari released more versions to support additional players and different games, and to imitate new arcade variants, and a wave of knock-offs arrived. Some of the home units were made more suitable for their living-room contexts be means of detachable controllers (a feature of the original Odyssey) and some allowed the players to control the release of the ball.

With the 1977 launch of the Atari Video Computer System (VCS, which of course became better known later as the Atari 2600), Pong possibilities expanded. The system came with a cartridge that was basically a version of the arcade game Tank with some additional options and some new plane games – the familiar Combat. The Atari VCS was in large part designed around the requirements of Tank and one other important hit arcade game. That one, of course, was Pong, and the launch title that implemented it for the system was Video Olympics by Joe Decuir, who also did the core of Combat and worked on the Atari VCS chipset. Video Olympics is a paddle game and has fallen by the wayside among recent VCS players, who rely on the trusty joystick that was the only controller included with the final manufactured version of the Atari 2600 and with the Atari Flashback systems. It’s an interesting game, though. For one thing, there’s the primitive “AI” that it offers in its first two “Robot Pong” variations, which offer challenge for a single player – a challenge that Combat didn’t provide on the system. It also provided an explosion of Pong variants that vaguely referred to numerous sports, deepening a trend that could aready be discerned in dedicated home units. 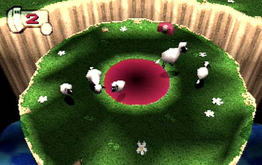 Games reimplementing, referencing, and playing with Pong have shown up in many contexts since then. They’re not hard to find on the Web and can even be spotted on seat-back entertainment systems in airplanes. One of the more elaborate attempts to reboot the Pong franchise was the Playstation game Pong: The Next Level, for Playstation and PC, which moves the game into crude but 3D spaces populated by, for instance, penguins on ice or sheep on an island. Various power-ups and complexities are added to the mix. It’s a great example of dropping the things that make a classic game great – effective controllers, simplicity and directness – and adding things that are completely irrelevant.

The more recent GBA game Boundish doesn’t make the same mistake. It’s much more abstract and compelling visually, as with the other titles in the bit Generations series. While the game adds radial play and other interesting variations, it keeps the complexity of play at a good level. The problem is that, while Boundish supports a two-player mode with one cartridge, two GBAs can be made into a two-player system only after a great struggle involving cables that are different for each model (original, SP, and Micro – forget using a DS). And, the cartridge provides further evidence that even a good one-player Pong, incorporating what we’ve learned since the days of Video Olympics, is lame compared to the two-player experience.

Pong continues to resonate, though. Plasma Pong by Steve Taylor is an intriguing recent project that added fluid dynamics – one that was apparently halted at the behest of the current Atari. It just goes to show that even if the company can’t take off from Pong and innovate, it can still prevent others from doing so. My guess is that successful future Pong games will probably be made. I suppose it’s possible that something spectacular might happen on the more highly representational, 3D front, using licensed properties – say, a collaboration between Natalie Bookchin, John Woo, and Chow Yun-Fat – but I’m not holding my breath. To keep Pong‘s power, new twists on the game will probably need to keep the abstraction, the directness, the good control scheme, and certainly the two-player nature of Al Alcorn’s first arcade cabinet.