Code and Music on In Media Res

Yo dawg, I hear you like blog posts. So I put a link to a blog post in your blog post. The link goes to my “Curator’s Note” on In Media Res about very short programs to generate music, in which I also mention how poorly suited prevalent Web systems are for transmitting and discussing code.

A Flowing Mixture, by Shenielle Thomas

So my inspiration for the following story is artist Daniel Canogar’s piece Hide 2. The portrait was created by inscribing many different fingerprints ( all from different people) digitally; the prints blurred and overlapped creating only partial prints.When I looked at it, it  made me think of big mixing pot were everyone was mixed together by their finger prints. So I decided to write a story where the melting pot was literal.

This is a preview of A Flowing Mixture, by Shenielle Thomas. Read the full post.
Comments at original post.

from Expressive Intelligence Studio Blog
by Josh McCoy @ 10:07 pm
It is our pleasure to present Prom Week’s Audience Choice Special Release!
Please enjoy playing this version of Prom Week — we would very much appreciate your vote in the 2012 Independent Games Festival Games: Main Competition Audience Award.

Dr. Cecil Brown began his lecture Games Blacks Love to Play by citing Marshall McLuhan’s 1964 observation that the games people play mirror the surrounding culture. Brown uses this stance—that games teach us about the culture they come from—to explore the history of African Americans, the interplay between black and white play cultures, and the effect these diverse forms of play had on American culture at large.

Brown divided American history into three stages. First, slave culture, in which outdoor physical play predominates. Under slavery, blacks rarely learned to read and write, as punishment was having your hands cut off. Black culture, thus, was primarily oral and kinetic out of necessity. Second, segregated culture, characterized by dance. Thirdly, integrated culture, which our digital culture is a part.

This is a preview of Cecil Brown on Games Blacks Love to Play. Read the full post.
Comments at original post.

The Man and the Machine by Hannah Collman

from tiltfactor
by newmedia @ 3:53 pm

“Our machines are disturbingly lively, while we ourselves are frighteningly inert.”

Kenneth laughs, quoting the prophecy of Donna Haraway. He wiggles his fingers limply as the cyborg pins him to the wall. “It’s quite apt, don’t you think?” He turns to me and grins. “Who knew that giving all artificial lifeforms links to communicate with each other would lead to this? Now I’m the canvas, and this– this machine, the painter…” He turns and stares the creature in its webcam. “What’s your name, then?”

This is a preview of The Man and the Machine by Hannah Collman. Read the full post.
Comments at original post.

The flesh as a digital canvas, by William Wang

from tiltfactor
by newmedia @ 3:53 pm

He doesn’t understand my perspective, James thinks. He’s old, and utterly oblivious to what I want for myself!

As he flips through his tattoo artist’s portfolio, James imagines how his dad will respond when the deed is done. After all, that ink would be embedded in his skin forever—barring, of course, expensive cosmetic surgery. No amount of shouting or demeaning could change that fact. His dad might inflict some punishment, but the subversion would be immutable.

This is a preview of The flesh as a digital canvas, by William Wang. Read the full post.
Comments at original post.

Copy and Paste: A New Era of Originality by Kayla Gilbert

from tiltfactor
by newmedia @ 3:52 pm

With an interface that is so controlled, can there ever be something truly original? Moreso, is there something that cannot be reproduced by someone else?

The hand of the artist is forever attached to the artist and is unlike any other hand and their brain unlike any other persons.  Yet, the computer and technology is made uniform, homogenous, so that the interface is the same for everyone that uses it.  Is that where it all differs?

This is a preview of Copy and Paste: A New Era of Originality by Kayla Gilbert. Read the full post.
Comments at original post.

A New Paper on the Dreamcast

I’m very pleased to see the article Mia Consalvo and I wrote published in Loading…,
the journal of the Canadian Game Studies Association (CGSA). There’s an intriguing lineup of articles in Loading… Vol 6, No 9; ours is:

This is a preview of A New Paper on the Dreamcast. Read the full post.
Comments at original post.

Virtual and Physical by Shenielle Thomas

When people say the words “Virtual world” people think of the digital world that mimics our own in many ways. However, artists are now creating installations which redefine what we think of a virtual world. In the works of Jeffery Shaw, we are confronted with a different type of virtual world, especially in one his pieces, called “The Legible City.” 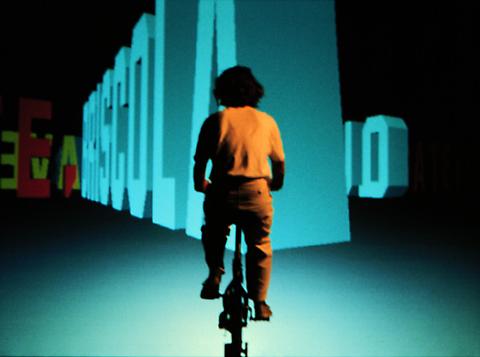 In this work, the artist recreated the architecture of real maps and cities in a virtual world in which the viewer was able to navigate through cycling. However, instead of buildings and landmarks, these monuments are replaced with words or phrases that were recovered from documents recording historical events. According to Christiane Paul, this work creates a connection between our physical world and the virtual, which we see through the introduction of the cycling. We were always removed or distanced from navigating the virtual world physically. We walk around in a virtual world usually by using the arrow keys on keyboards. However in “The Legible City” the viewer can incorporate his entire body to interact with this virtual world.

This is a preview of Virtual and Physical by Shenielle Thomas. Read the full post.
Comments at original post.

I brought the war, by Cally! Womick

from tiltfactor
by newmedia @ 3:48 pm

The following is a response, or perhaps companion, piece to Olia Lialina’s My Boyfriend Came Back from the War.

I didn’t go- none of us did.
They thought we went, but we didn’t.

We were here.
They didn’t think so, so they screamed at us
and shot at us
and wanted us to die.
“Maluus zebr” they said about
each of us in turn.

But here it is, I still have it.

And this- see the dust
still caked into the fibers?
I shouldn’t have it, they have rules about trophies,
but this is from when we were bombed
out of bed-
well, I wasn’t in bed.

This is a preview of I brought the war, by Cally! Womick. Read the full post.
Comments at original post.

from tiltfactor
by newmedia @ 3:41 pm

What’s the boundary between “virtual” reality and actual reality? Virtual reality’s original meaning, according to Christiane Paul in Digital Art, is “a reality that fully immersed its users in a three-dimensional world generated by a computer and allowed them an interaction with the virtual objects that comprise the world” (p. 125). As technologies improve, the boundary between alternate realities can be faded and hard to discern. This phenomenon is effectively used in digital art and can bring an entirely unique experience to participants.

This is a preview of Virtual Reality in Digital Art, By Eric H. Whang. Read the full post.
Comments at original post.

“A 1700 line text generated using a string of unix commands to process a short text file describing an encounter with a cat.”

This is all thanks to James W. Morris. He is the author and artist – not the cat.